Campaign for the memory of women persecuted for witchcraft

Violence against women becomes more brutal every day. As women and as feminists, we feel it is essential to reopen a page of history that has not only been forgotten but has, in some places, become reduced to a profit-making scheme. Societies that do not remember their history are doomed to repeat it.

We launched a campaign to recognize the thousands of women in Europe and the Americas who were tortured and murdered in horrific ways after being accused of witchcraft. Our campaign also recognizes that the witch hunts took place in the context of emerging capitalism, the modern State, and colonialism, and–crucially–that witch hunts still continue world-wide.

As part of this campaign, we ask that spaces memorializing the witch hunts aim to remember them as historical events, without spreading legends, stereotypes, or myths, or profiting off the witch hunts. We especially ask that spaces do not profit off the sale of objects or dolls that reproduce the monstrous images that witch hunters created to discredit and brutalize women. The popular image of the big-nosed, hatted witch is not innocent, but rather shrouds a bloody reality. It also perpetuates a degrading image of women, particularly older women.

Taking measures to recognize the crimes committed against these women and to create spaces that help us to reflect and not repeat the past are crucial, because witch hunts are not over: the persecution and killing of women accused of witchcraft continues in some regions of Africa, South Asia, and Oceania. The discourse that identifies powerful and free women as witches is used to attack leaders and communities resisting extractivism and looting in South America and elsewhere.

We hope that this appeal will reach feminist organizations and local institutions that can promote and launch initiatives to make the past visible. We ally ourselves with all those who have worked for years to bring the memory of women murdered in witch hunts into the light. 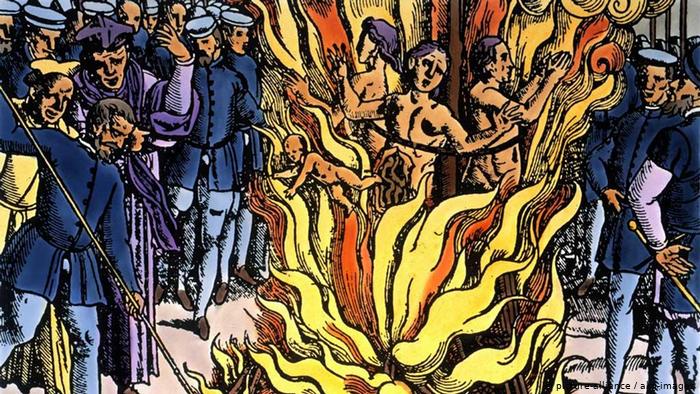