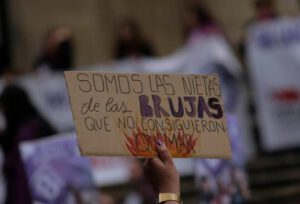 We are the Campaign for the Memory of the Women Persecuted for Witchcraft. Part of our analysis is that the Great Witch Hunts of Europe were a foundational process of modernity, one that disciplined women to accept their new place in the nascent capitalist society. Through the threat of violence, the witch hunts contributed to the shift away from the reproductive autonomy of rural communities and toward the proletarianization of peasants, new commercial relations, and the emergence of a State and Church that foregrounded population control through sexuality and procreation. There are commonalities between the witch hunts that took place in Europe during the sixteenth and seventeenth centuries and those that took place during the conquest of the Americas. However, rather than honoring the dead and learning from the past, the places where these witch hunts took place have often been reimagined as places of mythology and commerce. In many cases, the commercialization of the witch hunts reproduces the iconography of the persecuted, trivializing the violence they suffered and shrouding the historical processes that led to the hunts.

Because of this, we propose to:

You can contact us by reaching out to a local group, or to this general email:
editorial@traficantes.net